Decision on the design

Our client wanted to implement a Phase 1 dose finding study in Solid Tumor oncology. As in almost all such studies the objective was to find the MTD (Maximum Tolerable Dose), and the recommended dose regiment. The client had employees primarily experienced in implementing classical 3+3 designs, in such framework, but wanted to see if there would be added benefits by implementing more modern designs, like the continual reassessment method (CRM) design.

During a kick-off meeting a presentation on the advantages of CRM, which is a model based design, alongside a comparison to the classical 3+3, were explained. The main benefits of the CRM were the following:

The main concerns raised by the client were the following:

In order to address these concerns, the Adaptive Design Decision Tool was presented to the client. The goal was to use the tool to firstly help the clinical personnel to visualize the design during the design phase and enable their accurate contribution to the setup of the study. Secondly, it was suggested that tool would be kept live and updated (if needed), to enable the clinical personnel to anticipate decisions and to avoid waiting for the models to be run.

For the first simulation the standard rules used by ClinBAY were proposed:

In addition, hard safety escalation rules, prohibit any further use of a specific dose and above that, for the rest of the dose escalation, if the following criteria are met for that dose:

Using these rules for performing the dose escalation, the simulations were executed, and the results uploaded to the Adaptive Design Decision Tool for the Sponsors review (example screenshot below). 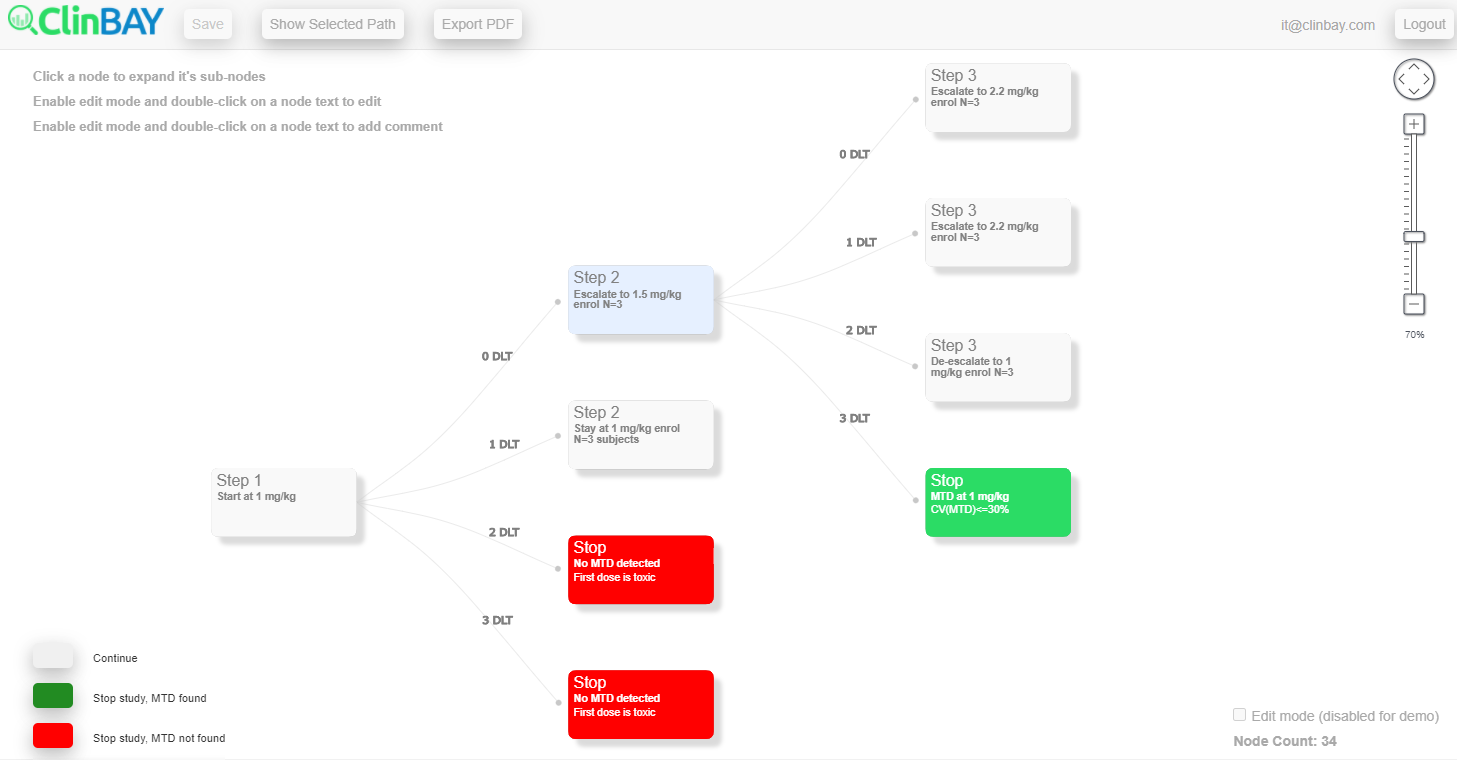 The sponsor exhibited concern that based on the current set of rules, model could propose an escalation if a DLT was observed. (See screenshot above, when a cohort has received 1.5mg/kg and 1 patient had an event out of 3, model proposes escalation to 2.2mg/kg). It was therefore decided to add the following rule:

The simulation was subsequently re-run and the tool updated. No further feedback was received on the simulation. Subsequently the required simulation package to accompany the protocol was generated.

It was also decided that to reduce timeliness decided 4 patients at the time would be enrolled per cohort, in order to reach 3 evaluable, rather than recruit 3 and only recruit one more if one was non-evaluable. The simulation was not re-run due to this decision, as the intention was to reach at least 3 evaluable patients, and it was expected than in most cohorts 4 patients would have led to 3 evaluable.

During the course of the study the sponsor referred to the Adaptive Design Decision Tool, for planning and decisions. Notable exceptions were the following:

Above case study, draws components from multiple studies/projects and not only one. Due to the extensive experience of ClinBAY working with these studies, drawing from a single study would not have presented the total flexibility of these approaches.

A visualization tool aimed at helping both to understand the recommendations during design phase and to enable quick decision making during the study execution phase.
Find out more

We will be pleased to hear about your trial project and provide you with a tailored-made, cost effective biometrics solution.

Thank you! You have been sucessfully subscribed to our newsletter!
Oops! Something went wrong while submitting the form.

Are you looking for a reliable biometrics CRO partner? Kindly contact us.